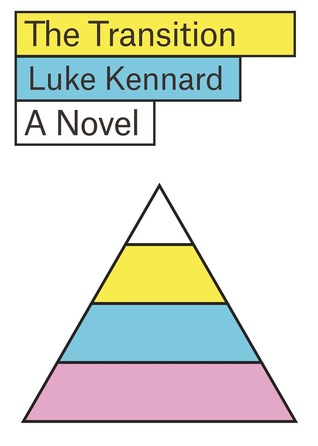 The Transition by Luke Kennard is clever, insightful and a real page turner. Welcome to the near future, self stocking fridges and technological advances have arrived but the housing market is in dire straits. Struggles to afford rent in even in run down shared houses lead Karl to fraud and tax infractions as a way of making ends meet. When the law catches up to him Karl is offered a choice, fifteen months in prison or  a place on a pilot scheme called The Transition. Having signed the forms both Karl and Genevieve embark on a new stage in their lives.

The Transition as an organisation is focused on bringing ‘failed’ adults up to speed so they can be ‘re-integrated into adult society’ and while to begin with it seems like an ideal alternative to prison, as with all utopia’s the imperfections surface the longer you look. Who scratched ‘not all transition’ as a warning? Why can Karl hear crying in the night?  Kennard plays the long game, slowly but surely revealing flaws and discrepancies in The Transition and it’s behaviour, as Karl and Genevieve experience more of it.  What makes the novel both enjoyable and disturbing is how easily the reader can relate it to stories they have heard or the news they might have seen.

There is a comical and yet smug attitude to Janna and Stu in their interactions with Karl and Genevieve, Stu in particular exudes an easy going self confidence that borders arrogance as they begin tutoring their new ‘proteges’ in how to lead successful adult lives. These interactions though at times patronising are a great strength of the The Transition, it’s characters displaying a great deal of personality that make it easy to invest in them as the novel unfolds.

Perhaps the best handled character is that of Genevieve as she struggles with mental illness. Genevieve is dealing with Bi-polar and is on medication for it, but as she flourishes in The Transition setting Karl becomes increasingly worried as Genevieve is encouraged to try different options. This impression of her struggles with Bi-polar is executed with delicacy and precision, making it a moving, respectful and effective portrayal of mental illness.

The novel is a fantastic dystopian novel looking at a future of rampart corporatism and widening of the class divide. With a disturbing near future that rivals the acclaimed Black Mirror television series and deserves acclaim as such. I would highly recommend this novel to fans of the dystopian sub genre.

(I was hoping to add a little bit extra following a seminar I was due to attend led by Luke Kennard, but due to the snow, he wasn’t able to travel and the seminar is being re-scheduled, so watch this space!)