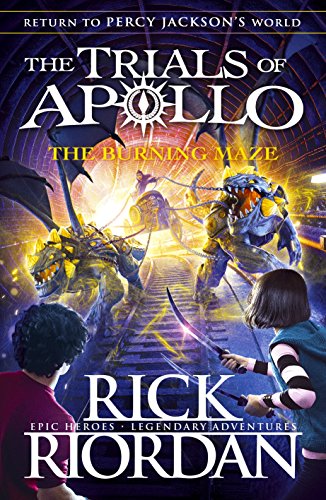 Rick Riordan’s books have been a staple of my reading since secondary school when I was introduced to The Lightning Thief. I have since picked up and read  every book he has published in that universe, The Burning Maze being no exception.

The Burning Maze is the third book in Riordan’s Trials of Apollo series, which focuses on the eponymous god, as he is cast down from divinity by Zeus and forced to obey Meg a young Demigod. In this particular installment we follow Apollo and Co. as they navigate a section of The Labyrinth, Battle Roman emperors and struggle to interpret Apollo’s oracles.

As always The Burning Maze features light-hearted humour: with Apollo cracking jokes, both bad and good and Coach Hedge slowly but surely trying to balance his love of family with his capacity for rampant mayhem. This book as with most of Riordan’s work will have adults and children alike chuckling as events unfold and characters grow.

Perhaps most interesting was the death of Jason Grace, a primary character off an earlier series. While not the focus of the trials of Apollo I found killing of a character that long term readers will remember having survived countless ordeals and effective way of upping the ante and tension in the series.  Perhaps it was necessitated by the use of Caligula as a villain and how scared Apollo is when he works out who they are facing. I wasn’t sure whether or not the ambiguity of prophecy would save the day but was glad for the integrity of the story when Roirdan followed through on the prophecy Herophile delivers to Jason in his first foray into the Labyrinth.

I do however wonder if more could have been done with the character of Crest. A relatively short lived character, Crest assists the protagonists on Caligula’s pleasure barge for a chance to learn the Ukulele from Apollo and become in his words ‘A god of Music.’ He is subsequently killed toward the end of the novel by Medea attempting to save Apollo from her magic. This to me felt very Anime in style, a character is introduced, directly focused on for an episode and then killed of to elicit emotion from characters and audience alike. Personally, I felt Crest’s death lacked its potential impetouos simply because he never really had a chance to become any more than an outsider. I do however believe this character would have been much more effective for the younger demographic that Riordan’s work is marketed towards.

Despite this bugbear I firmly believe that fans of the series of of Rick Riordan’s earlier work will be happy with this latest installment as Apollo bungles haplessly towards regaining his divinity and we get an insight into beloved characters from this series and previous ones as their timelines intertwine.

What did you think of The Burning Maze? Let me know what you thought in the comments below!