It is no secret that Anthem has launched to less that positive reviews with the general consensus being that the fundamentals are there but lacking the polish and depth that the majority of reviewers and consumers were looking for.  I haven’t played Anthem yet, holding off to see what the live service model looks like in the coming months and for more time to scope it out. As such the focus of this article will be on the live service model in general and the slow degradation of games pumped out by the Industry and in particular ‘AAA’ Publishers.

There have been a number of games in recent years that have fallen flat despite being well advertised and the beneficiary of significant community goodwill. No Man’s Sky and Star Wars Battlefront Two are just two of the examples that come to mind,More akin to Anthem, Destiny Two launched with good will born of what Destiny had gradual been turned into. These games have without exception fallen flat on their face, this is a symptom of a problem with the industry. Consumer Apathy. Over the years, less content, more paywalls and micro-transactions have been allowed to become the norm, the vast majority of consumers simply accepting the games as they were. Anthem, is a result of the attitude that high profile developers have adopted, a rushed product with solid fundamentals and the wisp of a promise  that over time it will be what they promised.

So why are developers so set on the live service model? The answer is money. (I know, shocking) The reality of the situation is that if they can carve content into pieces and charge you extra for it, or keep you coming back and playing with the option to pay and skip content, they will. The PR machine will tell you that they don’t balance games to tempt players to pay rather than play, this is a myth, a myth the giant patch Middle Earth: Shadow of War needed when micro-transactions were removed evidenced. It’s not as if I am the first to notice this trend, pundits such as TotalBiscuit, Jim Sterling, Yong Yea to name a few, have been talking about it for years. However with the community backlash against Anthem I wanted to talk a little about how the industry set Anthem up to fail before development even started. Why? Because the developers have eroded games to split them up and to charge us more as I alluded to above. They have done this because we let them.

Corporate greed is of course a large factor in the decision making of these companies, they need to please the shareholders and their investors. However, the bit I suspect most people reading this know already is that the community or the consumers, have played a role in this decline as well. Voting with your wallet is a common term, and never more applicable than here. You shouldn’t support games that include or use exploitative practice. It doesn’t matter if you buy Micro-Transactions, if you buy the game you directly support the decisions that went into the fundamental design of the game and marketing strategy. I get it, games are exciting and when you really want one, boycotting it is frustrating and difficult, but boycotting is a way to send a message. An effective one.

We’ve seen how quickly publishers like EA back off when their stocks begin to fall and when copies of games don’t sell. Star Wars Battlefront was the perfect example of community backlash getting results. The reason for the discontent was clear, it had a tangible affect and garnered results. It is a repeatable occurrence and I hope it will be a situation that we see more often as more of the community begins to take notice to the exploitative practices. But it isn’t enough to just push once, because publishers will try new things, we as a community have to send the message consistently. I understand that it can be fatiguing, most people myself included play video games for a good time, to unwind and enjoy themselves. But the quality of experience has been declining and if people don’t take notice they will soon find that the content they used to get for free is locked behind a paywall. That is where consumer apathy leads, greater exploitation.

The success of the live service model is why we are seeing fewer single-player games hit the market. Developers don’t want to sell a complete experience that they can only charge once, or maybe twice for with DLC. They want to sell you that season pass and give you the option of catching up by paying for items. But single players are successful, they are desired by the community and as such when a game like God of War launches, it should be supported. To show developers that money and sales come with the community goodwill garnered by recent examples of complete single-player experiences.  It is not contestable that single-player games are successful, look at Breath of the Wild, God of War, Horizon Zero Dawn.

There isn’t an easy, single answer fix to the problem of corporate greed. A lot of reviewers are reliant of early copies for views and traction, and won’t risk getting blacklisted. This makes the vast majority of reviews of questionable integrity and potentially misleading to consumers at large before the launch of the game. Loot Boxes are a stable part of the fully priced video game market now and simply pushing back against malpractice as a community likely will not work at this point. A large number of the gaming community also simply don’t care or are too young to pay attention to the issues within the industry. Still, it is a fact that consumer apathy makes a difference and a proactive and engaged community likewise has an impact. 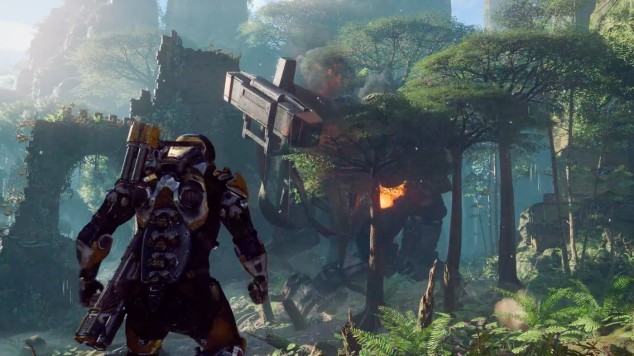 Ultimately we can only make a difference as a community and that starts with making decisions as individuals. Anthem will no doubt be a better game in a years time, fleshed out with more content and taking advantage of feedback but right now, it is floundering amidst a tumultuous launch. The only way I can see to stop this is to protest the live service model. Game developers should not get away with faster releases for unfinished products by offering the promise of a finished game. If this becomes the case a standard ‘game’ price, is simply a fifty pound price tag for glorified early access.  They have found success with this model and that can’t continue to happen. I for one, do not want to see Fallout 76 become the new normal. To avoid this we need companies to fail to meet promises to investors. If they can’t meet their goals then they will be forced to change their tactics.

So let’s say no to apathy and be an active community, whether by boycotting, writing reviews or being involved in discussions, as a community we can make a difference and we should. The standard of Live Service games at launch is simply not good enough.

What do you think of the live service model? Do you have hope for Anthem? Let me know in the comments.